There are clouds on the economic horizon, and talk of recession is swirling. These are the times when investors get nervous. They may start checking their accounts more frequently. They may wonder about de-risking their portfolios or getting out of the markets entirely. As their level of concern rises, they’ll look to you for more than reassurance; they’ll want a strategy that can help them stay on track towards their financial goals.

In many cases, that strategy is a plan to invest regularly and take advantage of dollar-cost averaging. When clients invest the same amount of money every week or every month, they can exploit down markets to buy more units “on sale” and lower the average cost of all their units (see sidebar). Systematic investing can help keep clients focused on putting their cash to work, rather than on the fear of an unknown future.

That’s important because the future isn’t actually all that unknown. Historically, periods of economic expansion follow periods of economic contraction, and bull markets follow bear markets. Even when there’s a severe market drop, as there was a decade ago when the S&P 500 Index lost 57 per cent over a period of 517 days (about one and a half years), the recovery didn’t take all that long. After 1,020 days (about two and a half years), the S&P 500 was up 133 per cent – achieving the return needed to break even. 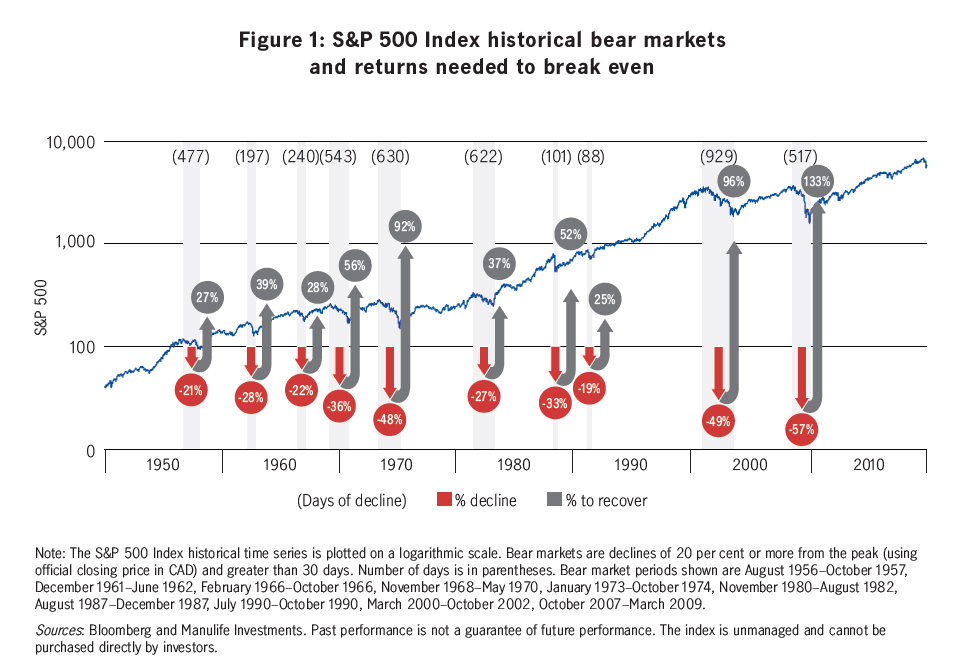 Furthermore, in the 10 years after the S&P 500 hit its lowest point in March 2009, it generated an annualized total return of 17.8 per cent – making a good case for staying invested. The S&P 500 achieved similar results in the 10 years after its October 1987 low (17.2 per cent), its August 1982 low (17.6 per cent) and its September 1974 low (15.6 per cent).1 What all of this suggests is that remaining in the markets following a steep decline can deliver returns that significantly beat long-term averages.

As Philip Petursson, Manulife Investment Management’s Chief Investment Strategist, explains, “If [the markets are] down 10 per cent and we’re not in a recession … then you have a disproportionate opportunity to make a significant amount over the coming 12 months. [In fact,] your average one-year forward return going back over the last 30 years is 20 per cent.” He adds, “The rule that we have is, if you’re down 10 and there’s no recession, you buy.” 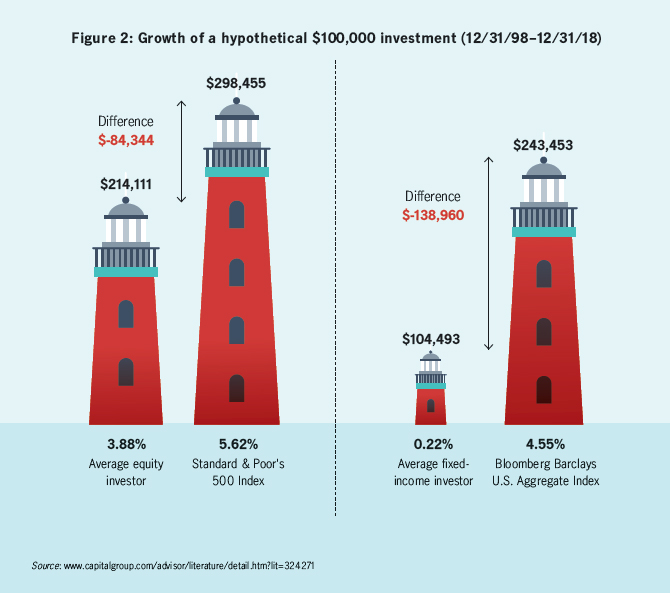 However, while markets have a good track record of recovering, investors have a poor track record of trying to guess when to jump into or out of them. They tend to sell too early and buy too late, and as a result the average U.S. equity mutual fund investor’s returns aren’t nearly as good as the S&P 500’s returns over the short term or over the long term. (See Figure 2. The “average investor” returns are based on mutual fund sales, redemptions and exchanges each month.)2

Rather than trying to time the market, which tends to be a losing game, a systematic investing plan gives investors a strategy they can commit to follow through times of positive and negative market news. Because clients have a clear roadmap towards their future goals, the strategy can also help prevent frequent account checking, which can feed anxiety in volatile times, cause panic selling and diminish returns.

“Research shows that the frequency of account checking is negatively correlated with investment returns, meaning that the more frequently they check their account, the lower their investment returns,” points out Dr. David Lewis, Chief Client Officer at behavioural science specialist BEworks. He recommends that investors check their accounts as often as they visit the dentist – so, roughly every six to nine months.

As long as clients have a time horizon that is five years or longer, they can generally afford to ride out a market decline and then catch the updraft that has historically always followed. Sticking to a systematic investing plan and avoiding too much account checking can help investors keep calm and carry on.

To make the implementation of a systematic investing plan easy, the Manulife Dollar-Cost Averaging Fund accepts lump-sum deposits and then makes systematic weekly switches into one or more Manulife mutual funds over the course of a year. Money that remains in the Manulife Dollar-Cost Averaging Fund, waiting to be invested, receives a 1.25 per cent rate of return with no management expense ratio. All advisors have to do is determine how much to deposit (above a $1,000 minimum) and which fund(s) are most appropriate for their clients, and Manulife takes care of the rest.

Of course, even with a systematic investing strategy in place, it’s likely that in turbulent times you’ll still get some calls from investors who want to stop contributing. It may help to remind them in terms they can relate to that low prices are an opportunity. Dr. Lewis suggests one approach: “I have friends call me and say, The market crashed – what should I be doing? And I say, well, What happened on Black Monday? Everything went on sale and you bought a big-screen TV you didn’t need. So, all the stocks just went on sale today; why don’t you go shopping?”

Learn more about the Manulife Dollar-Cost Averaging Fund at Manulifeinvestmentmgmt.ca.

Here’s a simple example that shows how a systematic investing plan can benefit an investor. Let’s say Janice commits to investing $100 in an equity mutual fund every week. As it happens, the markets are especially volatile over the next two months:

Over the eight weeks, Janice invests a total of $800 and buys a total of 86.4 units. Her average cost per unit is $9.26 and, although the cost per unit is lower in week 8 than it was when she started investing in week 1, the total value of her investments is $800.06. Despite significant volatility, she breaks even.

Because not even the most skilled professional investors can say with certainty when a stock has bottomed out or peaked, a systematic investing plan is a much less risky approach than attempting to time the markets.

By averaging out the cost per unit over time, and ensuring fewer units are purchased at high prices, it can help investors achieve greater potential capital appreciation.

4The Manulife Dollar-Cost Averaging Fund provides a rate of return of 1.25 per cent (annualized) effective August 1, 2019.

5 Manulife pays all of the operating expenses for the Manulife Dollar-Cost Averaging Fund, other than commissions and brokerage fees.