In July 2019, the United States surpassed the previous record of 10 years for the longest economic expansion in its history. So, are we due for a recession? Many typically reliable indicators suggest a U.S. economic contraction isn’t imminent. However, it may be prudent for advisors to start positioning their clients’ portfolios more defensively.

“We’re not calling for a recession inside of the next 12 months,” emphasizes Philip Petursson, Chief Investment Strategist at Manulife Investment Management “However, we do want to recognize that we are in a global economic slowdown [and] we are shifting [the Capital Markets and Strategy model asset mix] risks a little bit lower on our view for modest equity market returns, with perhaps some greater volatility over the next six to 12 months.” 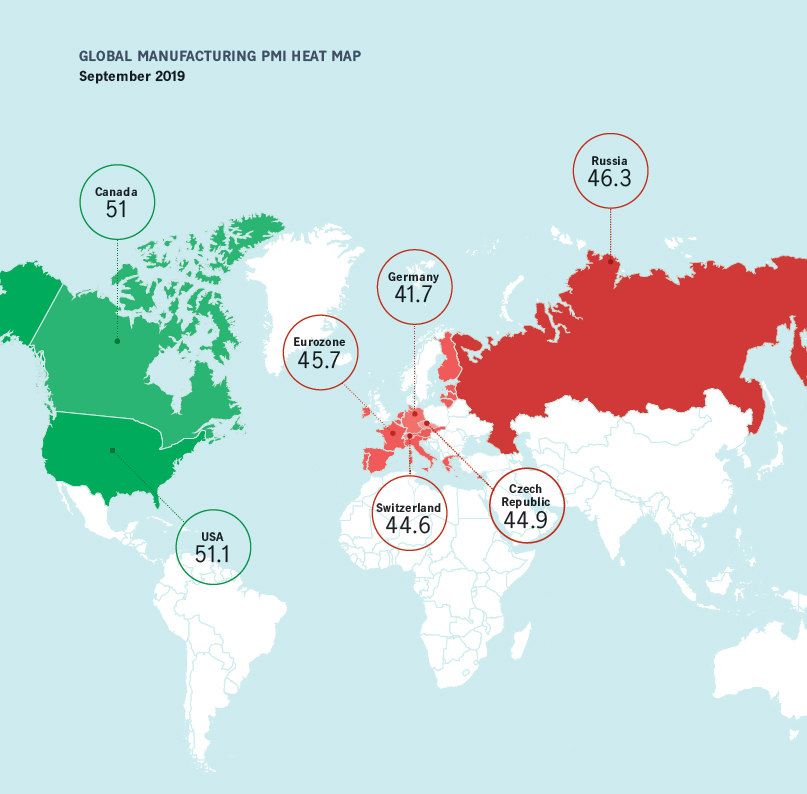 What do the leading indicators say?

When studying past recessions, several indicators have consistently predicted economic slowdowns. One is an inverted yield curve, in which long-term interest rates drop below short-term interest rates. That has happened when you compare 10-year to three-month U.S. government bond yields. However, the more reliable recession indicator compares 10-year to two-year U.S. government bond yields and, while that curve has flattened, at the end of June 2019, 10-year bonds were maintaining a 25 basis point lead. On June 28, yields for U.S. Treasuries were 2.00 per cent for 10-year bonds, 1.75 per cent for two-year bonds and 2.12 per cent for three-month bonds.1

Leading up to a recession, the Institute for Supply Management Purchasing Managers Index (ISM PMI), a measure of U.S. manufacturing strength, often falls below 45.0. In June 2019, it was 51.7, down slightly from 52.1 in May 2019.2 Putting those U.S. numbers in context, Petursson observes, “Manufacturing around the world has been slowing down, and in some areas of the world it has been contracting. This is important to us in terms of recognizing the health of the global economy because manufacturing has led to earnings growth … This would highlight the fact that we’re likely to see weaker earnings growth in the back half of 2019 on a year-over-year basis.”

Positive inflationary trends are another pre-recession signal, and today inflation is relatively well behaved against a backdrop of strong GDP (gross domestic product) growth, strong labour market growth and low unemployment, Petursson says. He points out that often in the past the strong inflationary shocks that preceded a recession were commodity-driven – for example, when oil prices rose dramatically in the early 1970s and again in 1990.3 There are no signs that’s happening now.

Housing starts typically decline in advance of a recession, often falling more than 20 per cent. The numbers from May 2019, show privately owned housing starts (seasonally adjusted) down 0.9 per cent from April 2019 and down 4.7 per cent from May 2018.4 While not indicating recession is imminent, these declines do show consumers are less willing to take on more debt and purchase new homes – something that happens as the economy softens and people sense their jobs are at risk – and also means there’s less work for those in the construction industry.

Labour market weakening is a traditional precursor to recession that has not materialized. In June, the United States experienced job gains of 224,000, solidifying average monthly gains of more than 200,000 over the past year – well above long-term average job creation of about 125,000. Unemployment was a healthy 3.7 per cent.5 Petursson points out that the United States has recovered all the jobs lost during the last recession and added nine million more. The country has added 12 million more jobs than during the last expansion.

“If we were only going to look at one [signal of recession], this would be the one that I would look at,” says Petursson of the Conference Board’s Leading Economic Index, which uses 10 components to measure the health of the U.S. economy. He says that, going all the way back to the 1970s, this index has always dipped negative in advance of a recession. It rose a slight 0.2 per cent in March 2019 and an even slighter 0.1 per cent in April – and was unchanged in May 2019.6 The move to zero may be cause for concern.

Putting it all together

“None of the typical signs of recession are present today,” Petursson says. However, three indicators – an inverted yield curve, capacity utilization above 80 per cent and declining housing starts – recently went from “hard no” to “soft no.” In addition, global trade is weaker than a year ago, and some countries are experiencing negative year-over-year export growth. While Petursson doesn’t feel equities are overvalued, against this backdrop he expects earnings growth to decelerate through the remainder of 2019, putting pressure on equity markets. 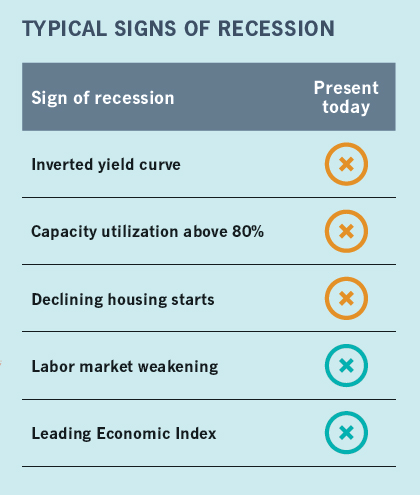 Three signs of recession have recently turned from green to yellow. First, the yield curve measured by the 2/10 yield spread has been flattening, leading us to change that measure from a No to a soft No. That means that watching this metric has become increasingly important.

Second, we have seen weakening in the U.S. housing market as measured by housing starts and existing and new sales. While it is too early to proclaim troubles in U.S. housing, this is another metric to watch closely.

Based on our work, we are not suggesting a recession or bear market is imminent, but we do need to be respectful of the duration of the current economic cycle and where we are within it.


“There’s plenty of uncertainty out there right now that can impact earnings growth, valuations, the global economy, manufacturing and so on. A lot of it has to do with the trade tensions between the United States and China, these two being the largest and second-largest economies in the world, and they’re tied into a number of other global economies through the global supply chain,” Petursson says. “We’re not predicting a correction … but what we would suggest is that the upside risk to the equity markets is a little bit more modest than what we would expect in an average year.”

As a result, the Manulife Investment Management team has adjusted the allocation of the Capital Markets and Strategy model asset mix to 50 per cent bonds/50 per cent equities, with the bond component divided into 35 per cent core sovereign and investment-grade bonds and 15 per cent high-yield bonds, including emerging market debt. The allocation to high-yield bonds is based in part on historical data that shows that, compared to equities, this asset class tends to deliver less downside in a bear market and similar upside coming out of a correction or bear market (see graphs).

We’re likely in the ninth inning of the market expansion, making this a good time to initiate conversations about risk tolerance and realistic return expectations with your clients. For some, it may make sense to shift part of an equity allocation to high-yield bonds. For all, it’s important to get ready to face whatever the markets do next.